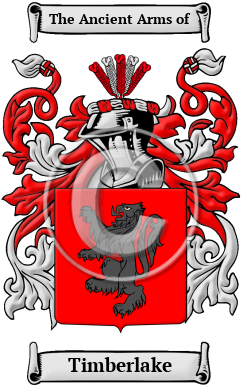 Early Origins of the Timberlake family

The surname Timberlake was first found in Cheshire where they held a family seat in very ancient times as Lords of the manor of Timperley, before and after the Norman Conquest in 1066 A.D.

Early History of the Timberlake family

This web page shows only a small excerpt of our Timberlake research. Another 56 words (4 lines of text) covering the years 1570, 1625, 1626, 1603, 1631, 1612 and 1617 are included under the topic Early Timberlake History in all our PDF Extended History products and printed products wherever possible.

Spelling variations of this family name include: Timperley, Timberley, Temperley and others.

Notables of this surname at this time include: Nicholas Timperley of Suffolk; and Henry Timberlake (1570-1625), a prosperous London ship captain and merchant adventurer who travelled to the Mediterranean. Henry Timberlake (d. 1626), was an English traveller, wrote 'True and Strange Discourse of the Trauailes of two English Pilgrimes,'...
Another 47 words (3 lines of text) are included under the topic Early Timberlake Notables in all our PDF Extended History products and printed products wherever possible.

In the United States, the name Timberlake is the 6,572nd most popular surname with an estimated 4,974 people with that name. [1]

Migration of the Timberlake family

Some of the first settlers of this family name or some of its variants were: Robert Timperley settled in America in 1757; J. Temperli settled in Texas in 1854.