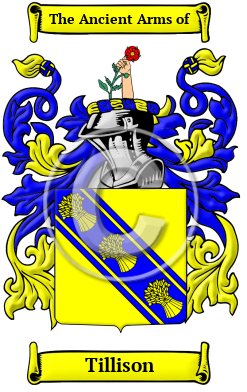 Early Origins of the Tillison family

The surname Tillison was first found in Cheshire at Tilston, a village and a civil parish that was anciently the site of the Roman town Bovium, which was on the Roman road between Chester and Wroxeter. By the time of the Conquest, the village was known as Tilleston which was the spelling used in the Domesday Book of 1086. At that time, the lands were held by Eynion de Tilston, and was granted to him by Hugh Lupus, the nephew of King William I. [1]

It is presumed that the village was so named having derived from an Old English personal name + "stan" as in the "stone of a man called Tilli or Tilla." [2]

Early History of the Tillison family

Distinguished members of the family include John Tillotson (1630-1694), from Sowerby, Yorkshire, an English clergyman, Dean of Canterbury in 1672, Archbishop of Canterbury (1691-1694.) After his death, his widow received 2500 guineas for his manuscript sermons and these were edited and published by Ralph Barker as the "Rule of Faith&quot...
Another 49 words (4 lines of text) are included under the topic Early Tillison Notables in all our PDF Extended History products and printed products wherever possible.

In the United States, the name Tillison is the 18,416th most popular surname with an estimated 2,487 people with that name. [3]

Migration of the Tillison family to Ireland

Some of the Tillison family moved to Ireland, but this topic is not covered in this excerpt.
Another 50 words (4 lines of text) about their life in Ireland is included in all our PDF Extended History products and printed products wherever possible.

Tillison migration to the United States +

Tillison Settlers in United States in the 17th Century