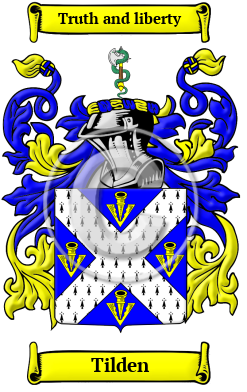 Early Origins of the Tilden family

The surname Tilden was first found in Kent where they have held a family seat from very ancient times. The name distributed to three main branches. The senior line held a family seat at Milsted in Kent. The second in Sussex which produced most of the American Tildens, and the junior branch settled at Ifield. They possessed lands in Brenchly, Otterden, Kennington, Biddenden, Torry Hill, Wye and Tilmanstone from about the year 1327, but most likely much sooner.

Early History of the Tilden family

This web page shows only a small excerpt of our Tilden research. Another 146 words (10 lines of text) covering the years 1560, 1613, 1260, 1754, 1832 and 1628 are included under the topic Early Tilden History in all our PDF Extended History products and printed products wherever possible.

Spelling variations of this family name include: Tilden, Tildon, Tylden, Tilderden, Tileden, Tillden and many more.

More information is included under the topic Early Tilden Notables in all our PDF Extended History products and printed products wherever possible.

Tilden migration to the United States +

Tilden Settlers in United States in the 17th Century

Tilden Settlers in United States in the 19th Century