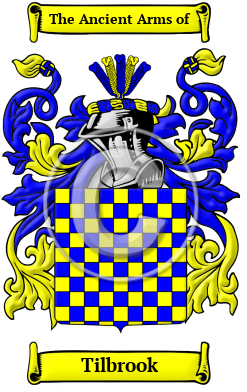 Early Origins of the Tilbrook family

The surname Tilbrook was first found in Huntingdonshire at Tilbrook, a village and parish near Covington that dates back to the Domesday Book of 1086 where it was listed as Tilebroc. [1] Hence, conjecturally, the surname is descended from the tenant of the lands of Tilbrooke, held by William de Warrenne, a Norman Baron who was recorded in the Domesday Book. Tilbrook probably means "brook of a man called Tila," from the Old English personal name + "broc." [2] Tilbrook is now part of Cambridgeshire but was anciently also in Bedfordshire. One of the first records of the surname was of William de Tilbroc in Lincolnshire who was listed in the Hundredorum Rolls of 1273.

Early History of the Tilbrook family

This web page shows only a small excerpt of our Tilbrook research. Another 66 words (5 lines of text) covering the years 1200, 1245 and 1340 are included under the topic Early Tilbrook History in all our PDF Extended History products and printed products wherever possible.

More information is included under the topic Early Tilbrook Notables in all our PDF Extended History products and printed products wherever possible.

Tilbrook migration to the United States +

Tilbrook Settlers in United States in the 20th Century

Tilbrook Settlers in Australia in the 19th Century