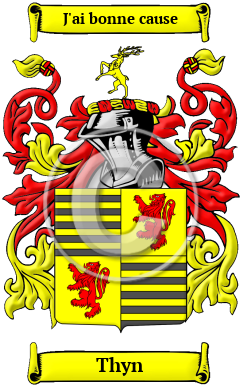 The name Thyn was brought to England by the Normans when they conquered the country in 1066. The ancestors of the Thyn family lived in Shropshire. The name, however, is a strange contraction of the phrase of the Inn, resulting from the fact that an early member of the family was the proprietor of such an establishment. "The name is derived from the mansion or inn at Stretton, in the county of Salop, (Shropshire) to which the freehold lands of the family, with various detached copyholds, were attached. " [1]

Early Origins of the Thyn family

The surname Thyn was first found in Shropshire where they were Lords of the Manor of Church Stretton. Traditionally, the name was originally Botfield or Botville, and Geoffrey and Oliver Bouteville came into England from a distinguished family in Pictou in France about 1180. [1] [2]

Early History of the Thyn family

It is only in the last few hundred years that the English language has been standardized. For that reason, Anglo-Norman surnames like Thyn are characterized by many spelling variations. Scribes and monks in the Middle Ages spelled names they sounded, so it is common to find several variations that refer to a single person. As the English language changed and incorporated elements of other European languages such as Norman French and Latin, even literate people regularly changed the spelling of their names. The variations of the name Thyn include Botfield, Botville, Boteville, Botfeld, Botevile, Thynne, Tyne, Tine, Tynes, O'Tyne, Thinn, O'Thinn, Thin, Then, Them and many more.

Outstanding amongst the family at this time was William Thynne (d. 1546), editor of Chaucer's works who claimed to have been younger son of John de la Inne. "His family bore the alternative surname of Botfield or Boteville, and he is often called 'Thynne alias Boteville.' " [4] Sir Thomas Thynne (ca. 1578-1639), of Longleat, Wiltshire, was an English landowner and politician who sat in the House of Commons between 1601 and 1629; Sir James...
Another 75 words (5 lines of text) are included under the topic Early Thyn Notables in all our PDF Extended History products and printed products wherever possible.

Migration of the Thyn family to Ireland

Some of the Thyn family moved to Ireland, but this topic is not covered in this excerpt.
Another 59 words (4 lines of text) about their life in Ireland is included in all our PDF Extended History products and printed products wherever possible.

Migration of the Thyn family

Faced with the chaos present in England at that time, many English families looked towards the open frontiers of the New World with its opportunities to escape oppression and starvation. People migrated to North America, as well as Australia and Ireland in droves, paying exorbitant rates for passages in cramped, unsafe ships. Many of the settlers did not make the long passage alive, but those who did see the shores of North America were welcomed with great opportunity. Many of the families that came from England went on to make essential contributions to the emerging nations of Canada and the United States. Some of the first immigrants to cross the Atlantic and come to North America carried the name Thyn, or a variant listed above: John and Anton Them who settled in Ohio in 1890; G. Than who settled in New York in 1849; John Tine, his wife Margaret, and daughter Elizabeth, who settled in Barbados in 1679.