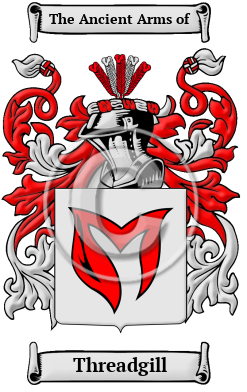 Early Origins of the Threadgill family

The surname Threadgill was first found in Cumberland, where they held a family seat as Lords of the manor of Threlkeld.

Today, Threlkeld is a village and civil parish in Cumbria, east of Keswick. The Threlkeld Quarry and Mining Museum is now located there attesting to the long history of mining in the area.

Early History of the Threadgill family

This web page shows only a small excerpt of our Threadgill research. Another 64 words (5 lines of text) covering the years 1360, 1676, 1728, 1698 and 1727 are included under the topic Early Threadgill History in all our PDF Extended History products and printed products wherever possible.

Spelling variations of this family name include: Threlkeld, Threlkelde, Thralkelde, Thrailkill and many more.

Notable amongst the family at this time was Caleb Threlkeld (1676-1728), an Irish botanist, dissenting cleric and physician. Born at Keibergh in the parish of Kirk Oswald, Cumberland, he graduated M.A. in the University of Glasgow in 1698, and soon afterwards became a nonconformist preacher. He made botanical expeditions in every part of the neighbourhood of Dublin, into co. Wicklow, co. Meath...
Another 62 words (4 lines of text) are included under the topic Early Threadgill Notables in all our PDF Extended History products and printed products wherever possible.

In the United States, the name Threadgill is the 9,177th most popular surname with an estimated 2,487 people with that name. [1]

Threadgill migration to the United States +

Threadgill Settlers in United States in the 20th Century