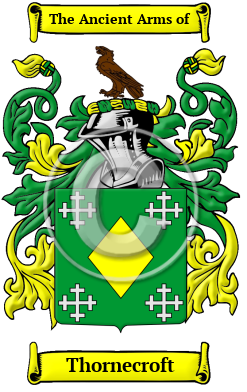 Early Origins of the Thornecroft family

The surname Thornecroft was first found in Cheshire where they held a family seat anciently as Lords of the manor of Thornycroft Hall.

Early History of the Thornecroft family

Notables of the family at this time include Sir John Thornycroft, 1st Baronet (1659-1725), an English Barrister-at-Law, High Sheriff of Oxfordshire in 1697. His son was Sir John Thornycroft, 2nd Baronet (1691-1743) but...
Another 33 words (2 lines of text) are included under the topic Early Thornecroft Notables in all our PDF Extended History products and printed products wherever possible.

Thornecroft migration to the United States +

Thornecroft Settlers in United States in the 17th Century