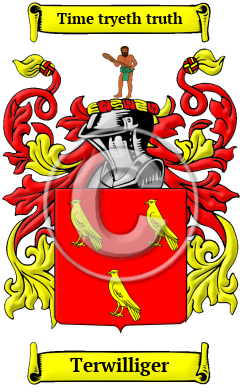 The Terwilliger surname comes from the place name Trewhitt in Northumberland; the first bearer of this surname was most likely someone who had come from that place to a new location.

Early Origins of the Terwilliger family

The surname Terwilliger was first found in Northumberland where the original reference of the name was found at High Trewhitt, and Low Trewhitt, townships, in the parish and union of Rothbury.

Originally named Tirwit (c. 1150-1162), the name possibly meant "river-bend where wood is obtained" [1] These small townships have grown little in size since early times as late as the mid 1800s, there were only 130 inhabitants there.

But looking back, other records show Sir Herculus de Trywhitt was knighted by Duke William in 1068 and granted the lands of Tyrwhitt or Terwit, however there is no record of the place in the Domesday Book.

Later John de Tyrwyt was listed in the Assize Rolls of Northumberland in 1296 and William Tyrwhit was listed in there in 1383. [2] The parish of Stainfield in Lincolnshire was an ancient homestead of the family. "There are some remains of an ancient mansion of the Tyrwhitt family, now occupied as a farmhouse." [3]

Early History of the Terwilliger family

In the United States, the name Terwilliger is the 8,020th most popular surname with an estimated 2,487 people with that name. [4]

Terwilliger migration to the United States +

Terwilliger Settlers in United States in the 19th Century