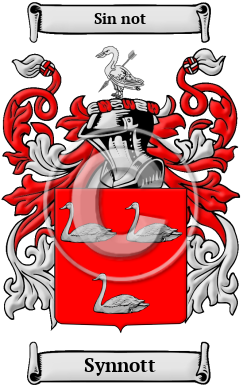 Early Origins of the Synnott family

The surname Synnott was first found in County Wexford (Irish: Loch Garman), founded by Vikings as Waesfjord, and located in Southeastern Ireland, in the province of Leinster. "Descended from an honourable stock, of Norman extraction. They were possessed of lands in Ireland from the time of the Invasion, and in the county where they first found footing." [1] They claim descent from the Marquis of Lusignan, whose descendants came into England, at or soon after the Norman Conquest.

Early History of the Synnott family

This web page shows only a small excerpt of our Synnott research. Another 191 words (14 lines of text) covering the years 1172, 1344 and 1720 are included under the topic Early Synnott History in all our PDF Extended History products and printed products wherever possible.

Church officials and medieval scribes often spelled early surnames as they sounded. This practice often resulted in many spelling variations of even a single name. Early versions of the name Synnott included: Sinnot, Sinnott, Sinnet, Sinnett, Sinot, Sinott and many more.

More information is included under the topic Early Synnott Notables in all our PDF Extended History products and printed products wherever possible.

Migration of the Synnott family

Ireland experienced a dramatic decrease in its population during the 19th century. This was in a great measure, a response to England's imperialistic policies. Hunger and disease took the lives of many Irish people and many more chose to leave their homeland to escape the horrific conditions. North America with its promise of work, freedom, and land was an extremely popular destination for Irish families. For those families that survived the journey, all three of these things were often attained through much hard work and perseverance. Research into early immigration and passenger lists revealed many immigrants bearing the name Synnott: Edward Sinnott, who was on record in Torbay, Newfoundland in 1774; Dennis Sinnott, who arrived in New York in 1789; Moses Sinnot, who came to Vermont in 1854.

Motto: Sin not
Motto Translation: If not