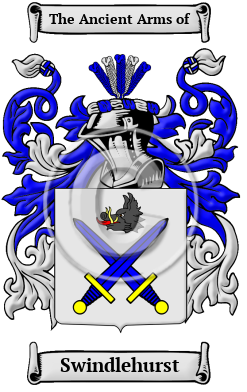 Early Origins of the Swindlehurst family

The surname Swindlehurst was first found in East Cheshire where they held a family seat as Lords of the Manor near Cheadle. "This was in the parish of Cheadle, in which immediate district all our Swindells have sprung." [1] "The name of Swindells in this county has mostly been confined to Stockport parish, and especially to the townships of Marple and Disley, from the reign of Henry VIII. to the present day" [2] One source claims the family was "a branch of the family of Howford [which] held a small estate here (Bosden) in the 14th century, called 'Swyndelves'" [1] "The name of Swindell is characteristic of Derbyshire, and both varieties occur in the intermediate county of Stafford." [2] "Swindale is a chapelry in the hundred of Shap, co. Westmorland." [3]

Early History of the Swindlehurst family

This web page shows only a small excerpt of our Swindlehurst research. Another 119 words (8 lines of text) covering the years 1510, 1600, 1468, 1561, 1608 and 1651 are included under the topic Early Swindlehurst History in all our PDF Extended History products and printed products wherever possible.

Another 31 words (2 lines of text) are included under the topic Early Swindlehurst Notables in all our PDF Extended History products and printed products wherever possible.

Migration of the Swindlehurst family

Historic Events for the Swindlehurst family +