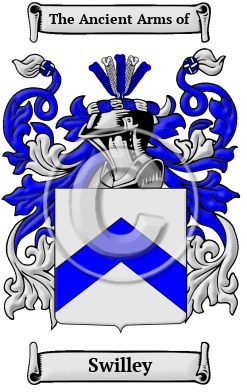 Early Origins of the Swilley family

The surname Swilley was first found in Yorkshire where they descended from the tenant of the lands of Swillington, held by Ilbert de Lacy, a Norman noble, who was recorded in the Domesday Book census of 1086. This small village consisted of a Church with a strange black tower. Thorpe-On-The-Hill in the West Riding of Yorkshire was home to a branch of the family in ancient times. "This place, which is now united with Lofthouse, was anciently the seat of the Swillingtons, and subsequently of the Gascoigne and the Ingram families." [1]

Early History of the Swilley family

This web page shows only a small excerpt of our Swilley research. Another 112 words (8 lines of text) covering the years 1510, 1600 and 1449 are included under the topic Early Swilley History in all our PDF Extended History products and printed products wherever possible.

More information is included under the topic Early Swilley Notables in all our PDF Extended History products and printed products wherever possible.

In the United States, the name Swilley is the 10,411st most popular surname with an estimated 2,487 people with that name. [2]

Migration of the Swilley family