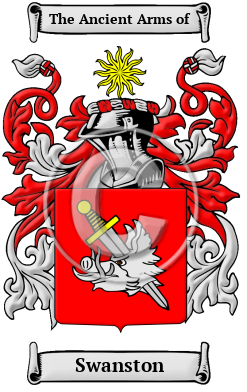 Early Origins of the Swanston family

The surname Swanston was first found in Durham where they were Lords of the manor of Stockton from early times. But by the year 1221 they had moved north into Scotland and acquired the lands of Swaynystoun, near Colinton, in Midlothian, where Duncan Swainston was the scion of that branch. [1]

Swainston Manor lies 1 mile (1.6 km) to the east of Calbourne on the Isle of Wight. It was originally a manor house but has now been converted to a hotel. It has a 12th-century chapel on its 32 acres thought to have been built by the Bishops of Winchester.

Early History of the Swanston family

This web page shows only a small excerpt of our Swanston research. Another 98 words (7 lines of text) covering the years 1605, 1661, 1660, 1661, 1660 and 1661 are included under the topic Early Swanston History in all our PDF Extended History products and printed products wherever possible.

Spelling variations of this family name include: Swainson, Swanston, Swenson, Swenston, Swainston, Swanson and many more.

Notable amongst the family name during their early history was Dr. Alan Swainston of York; and Francis Swanton (c 1605-1661) of Wincanton, Somerset, an English lawyer and politician...
Another 28 words (2 lines of text) are included under the topic Early Swanston Notables in all our PDF Extended History products and printed products wherever possible.

Swanston migration to the United States +

Swanston Settlers in United States in the 17th Century

Swanston Settlers in United States in the 18th Century

Swanston Settlers in United States in the 19th Century

Swanston Settlers in Australia in the 19th Century

Swanston Settlers in New Zealand in the 19th Century