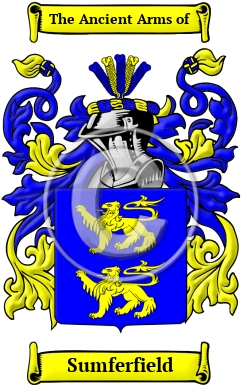 Early Origins of the Sumferfield family

The surname Sumferfield was first found in Staffordshire where during the reign of Henry II., John de Somerie acquired the Barony of Dudley in that county by marrying Mawyse, sister and heir of Gervase Paganell. Their great-great-grandson, Sir John de Somerie, Member of Parliament (1308-1322) died without issue. His castles and lands were passed on to his sisters, one of which married John de Sutton. [1]

Early History of the Sumferfield family

More information is included under the topic Early Sumferfield Notables in all our PDF Extended History products and printed products wherever possible.

Migration of the Sumferfield family