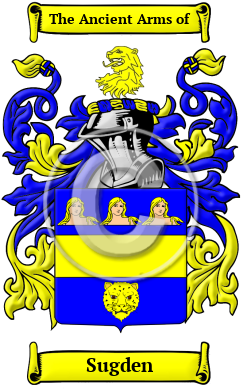 Early Origins of the Sugden family

The surname Sugden was first found in the West Riding of Yorkshire at Sugden, "some small spot, which I have failed to identify." [1] One of the earliest records of the name was William de Sugden who was listed in the Feet of Fines of Yorkshire in 1362. [2] Another source claims that the name was originally from Sussex. The Yorkshire Poll Tax Rolls of 1379 list Robertus de Sugden; Willelmus Sugden; and Robertus de Sugdeyn. [1]

Early History of the Sugden family

This web page shows only a small excerpt of our Sugden research. Another 184 words (13 lines of text) covering the years 185 and 1852 are included under the topic Early Sugden History in all our PDF Extended History products and printed products wherever possible.

More information is included under the topic Early Sugden Notables in all our PDF Extended History products and printed products wherever possible.

Sugden migration to the United States +

Sugden Settlers in United States in the 19th Century

Sugden Settlers in Australia in the 19th Century

Historic Events for the Sugden family +