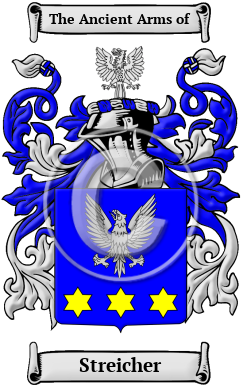 The distinguished Germany surname Streicher has two distinct origins. Firstly, it is derived from the place name "Streek," a town located in Odenwald; in this instance, the name would have been initially borne by someone who hailed from this town. Alternatively, Streicher is an occupational name, deriving from the Middle High German word "stricher," meaning "tester." In this instance, the name would have originally been used to designate someone in this occupation, eventually being passed down as a hereditary surname.

Early Origins of the Streicher family

The surname Streicher was first found in Austria, where the name emerged in mediaeval times as one of the notable families of the region. From the 13th century the surname was identified with the great social and economic evolution which made this territory a landmark contributor to the development of the nation.

Early History of the Streicher family

This web page shows only a small excerpt of our Streicher research. Another 87 words (6 lines of text) covering the years 1797, 1856, 1797, 1761 and 1833 are included under the topic Early Streicher History in all our PDF Extended History products and printed products wherever possible.

Another 37 words (3 lines of text) are included under the topic Early Streicher Notables in all our PDF Extended History products and printed products wherever possible.

In the United States, the name Streicher is the 17,963rd most popular surname with an estimated 2,487 people with that name. [2]

Streicher migration to the United States +

Streicher Settlers in United States in the 18th Century

Streicher Settlers in United States in the 19th Century