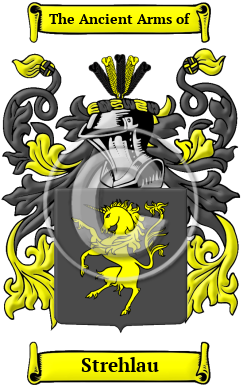 This surname is derived from one of several place names, and probably emerged independently in the different areas. Some of the name are derived from the place named Strehla in Saxony, on the Elbe river, Strehlen in Silesia, or from Strehlau, Eastern Germany.

Early Origins of the Strehlau family

The surname Strehlau was first found in Goerz, where the name Strehlau was closely identified in early mediaeval times with the feudal society of early Europe. The name would later emerge as a noble family with great influence, having many distinguished branches, and become noted for its involvement in social, economic and political affairs.

Early History of the Strehlau family

This web page shows only a small excerpt of our Strehlau research. Another 59 words (4 lines of text) are included under the topic Early Strehlau History in all our PDF Extended History products and printed products wherever possible.

Spelling variations of this family name include: Strehl, Strehle, Strehla, Strehlen, Strehlau and many more.

More information is included under the topic Early Strehlau Notables in all our PDF Extended History products and printed products wherever possible.

Migration of the Strehlau family

Some of the first settlers of this family name or some of its variants were: Johannes Strehle, a German soldier on record in America in 1778; Margaretha Strehl, a Hessian immigrant to North America in 1844; William Strehlau, who came to Philadelphia in 1879.

Historic Events for the Strehlau family +