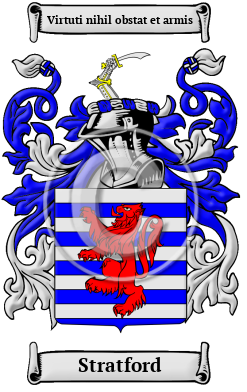 The Stratford surname is a habitation name derived from one of various places, so named. These place names come from the Old English words "stroet," and "ford;" thus describing a location where the road crossed a stream. Places named Stratford that can be found in the Domesday Book include towns in Suffolk, Wiltshire, and of course Stratford-upon-Avon, Warwickshire, held at that time by the Bishop of Worcester.

Early Origins of the Stratford family

The surname Stratford was first found in Suffolk where a Robert de Stratford was listed in the Domesday Book, as holding the Hundred of Samford both before and after the Conquest.

Early History of the Stratford family

Spelling variations of this family name include: Stratford, Strafford and others.

Another 41 words (3 lines of text) are included under the topic Early Stratford Notables in all our PDF Extended History products and printed products wherever possible.

In New Zealand, the name Stratford is the 930th most popular surname with an estimated 801 people with that name. [2]

Migration of the Stratford family to Ireland

Some of the Stratford family moved to Ireland, but this topic is not covered in this excerpt.
Another 61 words (4 lines of text) about their life in Ireland is included in all our PDF Extended History products and printed products wherever possible.

Stratford migration to the United States +

Stratford Settlers in United States in the 17th Century

Stratford Settlers in United States in the 19th Century

Stratford Settlers in Canada in the 18th Century

Stratford Settlers in Australia in the 19th Century

Stratford Settlers in New Zealand in the 19th Century

Stratford Settlers in West Indies in the 17th Century