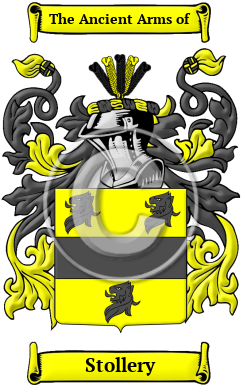 The name Stollery was a nickname for someone who was "stalwart" or "strong" having been derived from the "Middle English stalworth(y), stalew(u)rthe, etc.; Old English stæl-wyrpe, serviceable." [1] [2]

Early Origins of the Stollery family

The surname Stollery was first found in the Hundredorum Rolls of 1273 where John le Stalewrthe, Oxfordshire; and Henry Stalewrth, Cambridgeshire were found. The Yorkshire Poll Tax Rolls of 1379 had only one entry for the family at that time: Thomas Stalwrygh. [3]

Another source notes, Thomas Stalworthi was listed at Pinchbeck, Suffolk in 1285 and later, John Stalworthy was found in Suffolk according to the Subsidy Rolls of 1327. [4]

Early History of the Stollery family

This web page shows only a small excerpt of our Stollery research. Another 105 words (8 lines of text) covering the years 1285, 1279, 1685 and 1794 are included under the topic Early Stollery History in all our PDF Extended History products and printed products wherever possible.

More information is included under the topic Early Stollery Notables in all our PDF Extended History products and printed products wherever possible.

Stollery Settlers in Australia in the 19th Century