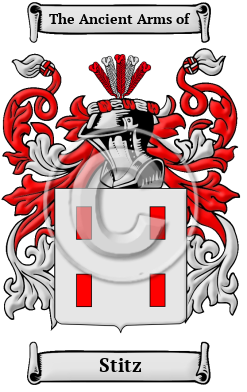 Medieval Silesia is the birthplace of the noble Stitz family. The Stitz surname is derived from the German word "stoltz," which means "proud," and as such, it was most likely originally a nickname, which became a hereditary surname.

Early Origins of the Stitz family

The surname Stitz was first found in Silesia, where the name contributed greatly to the development of an emerging province which would later play a role in the national conflicts of the area. In later years the name branched into many houses, each playing a significant role in local social and political affairs.

Early History of the Stitz family

Notables of the period with the surname Stitz were Thomas Stoltzer (1480-1526), who was a German composer and Kapellmeister to the King of Hungary. Georg Stolz von Gemappe, a calvary officer (Rittmeister) in the...
Another 33 words (2 lines of text) are included under the topic Early Stitz Notables in all our PDF Extended History products and printed products wherever possible.

Migration of the Stitz family

Some of the first settlers of this family name or some of its variants were: Jost Stoltz, who arrived in Philadelphia in 1725. Henrich Stoltz came in 1734; Henrich Rudolph Stoltze arrived in 1756; Georg Jacob Stoltzel in 1771; Regula Stolz in 1735.