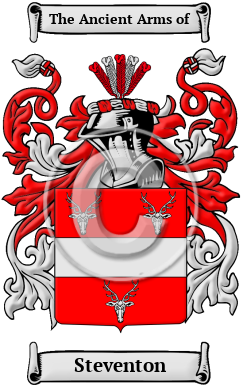 Early Origins of the Steventon family

The surname Steventon was first found in Shropshire. However, there are other villages named Steventon located in Hampshire and in Berkshire (now Oxfordshire.) These later two locations are both mentioned in the Domesday Book and both were spelled Stivetune at that time. [1] It is thought the place name derives from the Old English personal name Stf(a) + tun, or it meant "farmstead at the tree-stump place." [2] To find the first record of the surname we must look to Shropshire where the family name was first referenced in the 13th century. Years later, Robert de Stevington was listed in the Feet of Fines as rector of Knaption in Norfolk in 1321.

Early History of the Steventon family

More information is included under the topic Early Steventon Notables in all our PDF Extended History products and printed products wherever possible.

Steventon migration to the United States +

Steventon Settlers in United States in the 17th Century

Steventon Settlers in United States in the 18th Century

Steventon Settlers in United States in the 19th Century

Steventon Settlers in Australia in the 19th Century

Historic Events for the Steventon family +