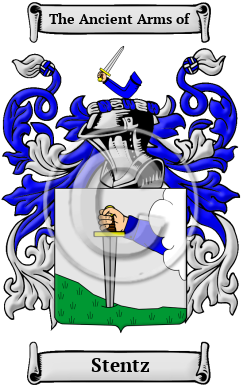 The roots of the distinguished German surname Stentz lie in the province of Silesia. The name is derived from "Stenz" or "Stenzel," both short forms of the personal name "Stenzlaw" or "Stanislaw," and indicates "son of Stenzel."

Early Origins of the Stentz family

The surname Stentz was first found in Silesia, where the name is thought to have first emerged. It was frequent as both a surname and a personal name in most cities of the region, particularly in Liegnitz. The young Stentz family was instrumental during this early period, playing a major role in the development of mediaeval Silesian society.

Early History of the Stentz family

This web page shows only a small excerpt of our Stentz research. Another 101 words (7 lines of text) covering the years 1427, 1781, 1810, and 1832 are included under the topic Early Stentz History in all our PDF Extended History products and printed products wherever possible.

Another 34 words (2 lines of text) are included under the topic Early Stentz Notables in all our PDF Extended History products and printed products wherever possible.

Migration of the Stentz family

Some of the first settlers of this family name or some of its variants were: Henrich Stentz, who settled in Philadelphia in 1733; Samuel Stenzel, a Hessian mercenary who settled in Newfoundland after fighting in the American Revolution, Caroline Stenz, who sailed from Bremen to New York in 1853.