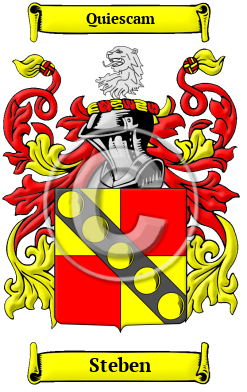 Steben is a name of ancient Norman origin. It arrived in England with the Norman Conquest of 1066. The Steben family lived in Essex having derived from the Old English word stybbing, meaning stumps, and indicates that the original bearer lived in or near an area which had been cleared of trees.

Early Origins of the Steben family

The surname Steben was first found in Essex at Stebbing, a small village in the Uttlesford district that dates back to the Domesday Book where it was listed as Stibinga and either meant "settlement of the family or followers of a man called Stybba" or "dwellers among the tree-stumps." [1] Although the Old English roots of this name suggest that they pre-date the Normans in Britain, they were also conjecturally descended from Thomas de Colunces who's son Hugh acquired the lands of Stebbing and Woodham Ferrars in Essex, containing two Mills, vines, and five beehives. Thomas was descended from the Colunces of Calvados in Normandy.

Stubbins is an industrial village in the southern part of the Rossendale Valley, Lancashire and dates back to 1563 when it was first listed as Stubbing. It literally meant "a place with tree stumps."[1]

Early History of the Steben family

This web page shows only a small excerpt of our Steben research. Another 59 words (4 lines of text) covering the years 1611, 1647, 1728, 1687, 1763 and 1735 are included under the topic Early Steben History in all our PDF Extended History products and printed products wherever possible.

Endless spelling variations are a prevailing characteristic of Norman surnames. Old and Middle English lacked any definite spelling rules, and the introduction of Norman French added an unfamiliar ingredient to the English linguistic stew. French and Latin, the languages of the court, also influenced spellings. Finally, Medieval scribes generally spelled words according to how they sounded, so one person was often referred to by different spellings in different documents. The name has been spelled Stebbing, Stebing, Stubbings, Stubbing, Stebbings and many more.

Another 31 words (2 lines of text) are included under the topic Early Steben Notables in all our PDF Extended History products and printed products wherever possible.

Migration of the Steben family

To escape the political and religious persecution within England at the time, many English families left for the various British colonies abroad. The voyage was extremely difficult, though, and the cramped, dank ships caused many to arrive in the New World diseased and starving. But for those who made it, the trip was most often worth it. Many of the families who arrived went on to make valuable contributions to the emerging nations of Canada and the United States. An inquiry into the early roots of North American families reveals a number of immigrants bearing the name Steben or a variant listed above: Edward Stebbing, who came to Cambridge Massachusetts in 1633, and was one of the founders of Hartford, CT; John, Rowland, Sarah, Thomas and Elizabeth Stebbins, who all arrived in New England in 1634.