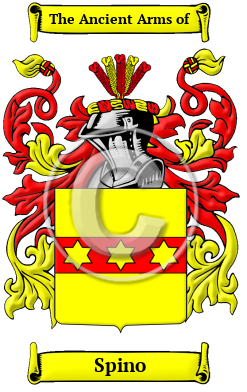 The Spino surname is derived from the Latin "spina," meaning "thorn bush," and was most originally born by someone who lived by a large or unusual thorn bush.

Early Origins of the Spino family

The surname Spino was first found in Naples, (Italian: Napoli, Latin: Neapolis) where the first bearer of the name on record is Ugone Spinelli in 1094. The name is also became common quite early in Emilia-Romagna and Venetia. The spelling variations of Spino which end in "i" are much more common and appear in records mostly in the north, whereas the rarer variations which end in "o" are from the south.

Early History of the Spino family

Prominent among members of the family was Parri Spinelli (ca. 1387-1453), an Italian painter of the early Renaissance from Tuscany; Bartolomeo Spina (born c. 1475-1546), Italian Dominican theologian and scholastic philosopher; Ugone Spinelli, who fought for Christianity in 1094 and was rewarded generously for his valor by Pope Urban II, who granted him 99 baronies, 8 count hoods, 9 marquishoods and 8 duchies; Giuseppe Spinelli (1694-1763), Italian Cardinal prefect of the Congregation for the...
Another 73 words (5 lines of text) are included under the topic Early Spino Notables in all our PDF Extended History products and printed products wherever possible.

In the United States, the name Spino is the 17,541st most popular surname with an estimated 2,487 people with that name. [1]

Spino migration to the United States +

Spino Settlers in United States in the 19th Century

Spino Settlers in United States in the 20th Century