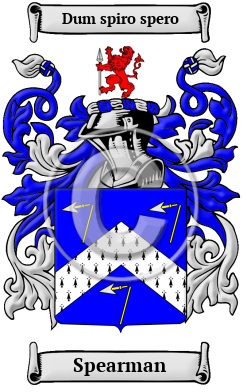 The Norman Conquest of England in 1066 brought much change, including many immigrants with new names. Spearman is a name for a watchman or guardian, and indicates the profession of the first person who used the name.

Early Origins of the Spearman family

The surname Spearman was first found in Shropshire where they were known as the Spearmans of Dunnington, anciently spelt Donington. The village at this time was only a Mill, and was owned by Earl Roger, from whom the Spearmans are conjecturally descended. Nearby is St.Cuthbert's well, the water of which is said to cure eye complaints. The family was "seated there since the Conquest, and said to be descended from the old Lords of Aspramont." [1] A branch of the family was found at early times in Thornley in Durham. "The township comprises the two estates of Thornley Hall and Gore Hall, both of which have been the property of the Spearman family for more than 150 years. Thornley Hall, a spacious mansion supposed to occupy the site of the castle, is situated on a commanding eminence." [2]

Early History of the Spearman family

This web page shows only a small excerpt of our Spearman research. Another 104 words (7 lines of text) covering the years 1542, 1614 and 1645 are included under the topic Early Spearman History in all our PDF Extended History products and printed products wherever possible.

Norman surnames are characterized by a multitude of spelling variations. The frequent changes in surnames are largely due to the fact that the Old and Middle English languages lacked definite spelling rules. The introduction of Norman French to England, as well as the official court languages of Latin and French, also had pronounced influences on the spelling of surnames. Since medieval scribes and church officials recorded names as they sounded, rather than adhering to any specific spelling rules, it was common to find the same individual referred to with different spellings. The name has been spelled Spearman, Speerman, Speirman, Spearmen, Speermen and others.

More information is included under the topic Early Spearman Notables in all our PDF Extended History products and printed products wherever possible.

In the United States, the name Spearman is the 3,536th most popular surname with an estimated 7,461 people with that name. [3]

Spearman migration to the United States +

Many English families emigrated to North American colonies in order to escape the political chaos in Britain at this time. Unfortunately, many English families made the trip to the New World under extremely harsh conditions. Overcrowding on the ships caused the majority of the immigrants to arrive diseased, famished, and destitute from the long journey across the stormy Atlantic. Despite these hardships, many of the families prospered and went on to make invaluable contributions to the development of the cultures of the United States and Canada. Early North American immigration records have revealed a number of people bearing the name Spearman or a variant listed above:

Spearman Settlers in United States in the 17th Century

Spearman Settlers in United States in the 18th Century

Spearman Settlers in Australia in the 19th Century

Historic Events for the Spearman family +