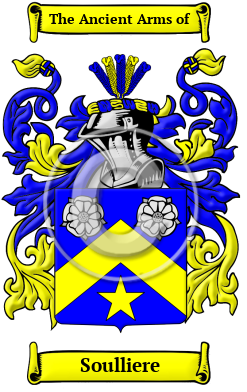 Early Origins of the Soulliere family

The surname Soulliere was first found in Périgord, where this eminent family held a family seat since ancient times.

By the 14th century this family were well established in many regions and many members of the family were distinctive citizens who held lands and titles. On 5th November 1340, Arnaud Saulnier was ranked as nobility and his lineage was continued until 1666. Throughout the centuries this ancient family branched, prospered, and expanded to various provinces where the members of the family adapted to the cultural and linguistic variations in these areas and became prominent members of their respective regions.

The Saulnier families of Anchald in Auvergne and in Bourbonnais, received their patents of nobility in 1816 and were hereditary Viscounts in 1828.

Early History of the Soulliere family

This web page shows only a small excerpt of our Soulliere research. More information is included under the topic Early Soulliere History in all our PDF Extended History products and printed products wherever possible.

More information is included under the topic Early Soulliere Notables in all our PDF Extended History products and printed products wherever possible.

Migration of the Soulliere family