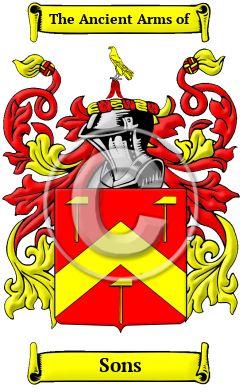 Early Origins of the Sons family

The surname Sons was first found in Suffolk where Earl Soham dates back to the Domesday Book [1] as lands held by Count Alan. At that time a manor was listed on four carucates of land. Some of the family remained in Normandy as Radulphus Sone was listed there in a census conducted 1180-95. [2]

The same census also listed a R. Sone or Sonne in 1198. The name literally means " homestead by the pool" when translated from the Old English sae + ham.

Soham is also a small town in Cambridgeshire that has a similar lineage that dates back to before the Domesday Book. For it is here that Saegham was listed c. 1100.[3]

But the name dates back further; Luttingus, a Saxon nobleman built a cathedral and palace at Soham around 900 AD, on the site of the present day Church of St. Andrews.

Early History of the Sons family

Before the advent of the printing press and the first dictionaries, the English language was not standardized. Sound was what guided spelling in the Middle Ages, so one person's name was often recorded under several variations during a single lifetime. Spelling variations were common, even among the names of the most literate people. Known variations of the Sons family name include Soam, Soams, Soames, Somes, Soame, Soan, Soanes and others.

Outstanding amongst the family at this time was Sir Stephen Soame (c.1540-1619), an English merchant and politician who sat in the House of Commons in 1601, Lord Mayor of London in 1598; Sir Peter Soam, Lord of the Manor of Berkesden, county Suffolk; Sir Thomas Soame (1584-1671), an English politician who sat...
Another 52 words (4 lines of text) are included under the topic Early Sons Notables in all our PDF Extended History products and printed products wherever possible.

Sons migration to the United States +

To escape the political and religious chaos of this era, thousands of English families began to migrate to the New World in search of land and freedom from religious and political persecution. The passage was expensive and the ships were dark, crowded, and unsafe; however, those who made the voyage safely were encountered opportunities that were not available to them in their homeland. Many of the families that reached the New World at this time went on to make important contributions to the emerging nations of the United States and Canada. Research into various historical records has revealed some of first members of the Sons family to immigrate North America:

Sons Settlers in United States in the 19th Century

Sons Settlers in United States in the 20th Century

Historic Events for the Sons family +