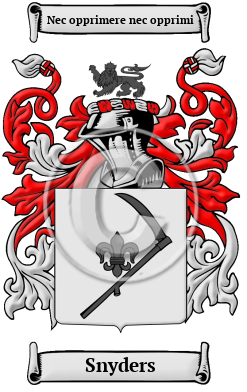 Early Origins of the Snyders family

The surname Snyders was first found in Staffordshire where one of the first on record was Henry de Sneyd who married Margaret, the daughter and heiress of Nicholas de Tunstall, of the Tunstalls of Lancashire and Yorkshire, in 1310. "The noble race of Sneyds, of great worship and account, appear to be denominated from Snead, a hamlet in the parish of Tunstall, in this county, where they were seated as early as the reign of Henry III.

By marriage with the heiress of Tunstall they had other lands in that parish, and for two descents were called Sneyd alias Tunstall." [1] "The arms of this family are a 'curiosity of heraldry,' being partly of the allusive kind, and consisting of a scythe and a fleur-de-lis. The pun is in the handle of the scythe, provincially called a snead. The fleur-de-lis said to have been added by Richard de Tunstall; alias Sneyd, after the battle of Poictiers; but I should rather consider it to have been part of the original device." [2]

The parish of Keele in the union of Newcastle-under-Lyme, the hundred of Pirehill in Staffordshire was a stronghold of the family since the mid 15th century through the 1940s. "The church, a neat embattled stone edifice with a tower, on an elevated site at the east end of the village, was built in 1790, principally at the expense of Colonel Sneyd; it contains about 350 sittings. " [3]

Early History of the Snyders family

This web page shows only a small excerpt of our Snyders research. Another 59 words (4 lines of text) covering the years 1581, 1614, 1695, 1660 and 1663 are included under the topic Early Snyders History in all our PDF Extended History products and printed products wherever possible.

Spelling variations of this family name include: Sneyd, Sneed, Snead, Sneade, Sneeds and others.

Another 50 words (4 lines of text) are included under the topic Early Snyders Notables in all our PDF Extended History products and printed products wherever possible.

In South Africa, the name Snyders is the 687th most popular surname with an estimated 9,909 people with that name. [4]

Migration of the Snyders family to Ireland

Some of the Snyders family moved to Ireland, but this topic is not covered in this excerpt. More information about their life in Ireland is included in all our PDF Extended History products and printed products wherever possible.

Snyders migration to the United States +

Snyders Settlers in United States in the 19th Century