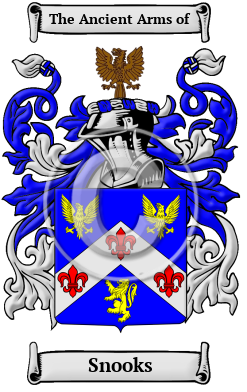 The name Snooks is most likely derived from the Old English word "snoc," which is a projecting piece of land. There is also a popular tale that the surname came from the place name Sevenoaks, in Kent, which was often pronounced "Se noaks." The town's name is derived from the Saxon word "Seouenaca", the name given to a small chapel near seven oak trees in Knole Park around 800 AD

Early Origins of the Snooks family

The surname Snooks was first found in Kent where Eduuardus Snoch was listed in 1066 in the Domesday Book. Other early references include Stenesnoc in Hampshire, and John and Thomas Snok in the Domesday of St. Paul's in 1222. Later records show Robert Shouk in the Subsidy Rolls of Sussex in 1327. [1]

And it is from this latter reference that the relationship to the aforementioned "Sevenoaks" is best shown. For it is here that Sussex deeds show a family of Snooks having many spelling variations from Sevenoaks to S'noaks. The name was pronounced "Sennocke" at the time and this pronunciation is still used at times in various places.

Early History of the Snooks family

This web page shows only a small excerpt of our Snooks research. Another 65 words (5 lines of text) are included under the topic Early Snooks History in all our PDF Extended History products and printed products wherever possible.

Spelling variations of this family name include: Snooks, Snook, Snooke, Snookes, Snouke, Snoukes and others.

More information is included under the topic Early Snooks Notables in all our PDF Extended History products and printed products wherever possible.

Snooks migration to the United States +

Snooks Settlers in United States in the 20th Century

Snooks Settlers in New Zealand in the 19th Century

Historic Events for the Snooks family +