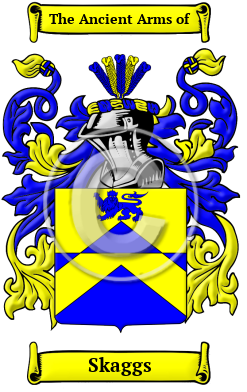 Early Origins of the Skaggs family

The surname Skaggs was first found in Huntingdonshire where they held a family seat as Lords of the Manor. The family name was first referenced in the 12th century when they held estates in that shire. Later, Thomas Skegge was listed in the Yorkshire Poll Tax Rolls of 1379.

The name is thought to have originated from the Old Norse word "skegg" which meant "beard." [1]

Early History of the Skaggs family

Another 36 words (3 lines of text) are included under the topic Early Skaggs Notables in all our PDF Extended History products and printed products wherever possible.

In the United States, the name Skaggs is the 1,921st most popular surname with an estimated 17,409 people with that name. [2]

Skaggs migration to the United States +

Skaggs Settlers in United States in the 20th Century

Suggested Readings for the name Skaggs +