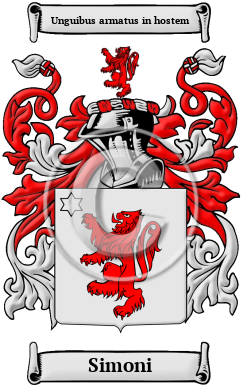 The name Simoni originated from the personal name Simon, itself a derivative of the Hebrew name "Sim'on," from the verb "sama" meaning "to listen." Thus, the name Simoni means "God has listened," referring to the gratitude of the parents who, having wished for a child, had their prayers answered.

Early Origins of the Simoni family

The surname Simoni was first found in Trapani, anciently Drepanum, Sicily. Bearers of Simoni or one of its spelling variations have been found throughout southern Italy, but particularly on the island of Sicily, and in the region of Campania.

Early History of the Simoni family

Spelling variations of this family name include: Simone, Simonelli, Simonetti, Simoni, Simioni, Desimone and many more.

Prominent among bearers of this surname in early times was Puccio di Simone (fl. 1346-1358), an Italian Gothic painter, active in Florence; Francesco (Cicco) Simonetta (1410-1480), an Italian Renaissance statesman remembered for composing an...
Another 34 words (2 lines of text) are included under the topic Early Simoni Notables in all our PDF Extended History products and printed products wherever possible.

Simoni migration to the United States +

Simoni Settlers in United States in the 20th Century