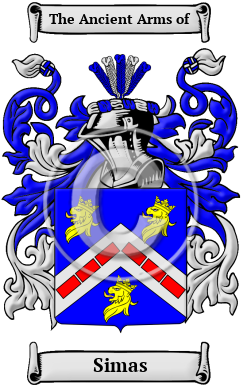 Early Origins of the Simas family

The surname Simas was first found in Guyenne in south-west France where they held a family seat in the seigneurie of Pitray. Guyenne was formerly a part of Aquitaine.

By the 14th century they had branched northward to the adjacent region of Angoumois. The main stem of the family were elevated to the Noblesse at Pitray. They became Vicomtes in the year 1860.

They flourished in this area of south-western France until the Revolution when, as with most of the other aristocratic families, they were subject to the persecutions of the new government.

Noel Simard, son of Pierre and Suzanne (née Durand), left France on 21st June 1657 to travel to New France aboard the ship "Le Taureau". Noel married Madeleine Racine in Quebec on 22nd November 1661. They settled together in Baie-Saint-Paul and remained there until his death on 24th July 1715. Noel and Madeleine had twelve children together that carried on the family name of Simard. [1]

Early History of the Simas family

This web page shows only a small excerpt of our Simas research. More information is included under the topic Early Simas History in all our PDF Extended History products and printed products wherever possible.

More information is included under the topic Early Simas Notables in all our PDF Extended History products and printed products wherever possible.

In the United States, the name Simas is the 8,611st most popular surname with an estimated 2,487 people with that name. [2]

Migration of the Simas family

Some of the first settlers of this family name or some of its variants were: Noel Simard arrived in Quebec from Angoumois in the year 1657; Francois Simmarre settled in Louisiana in 1719.