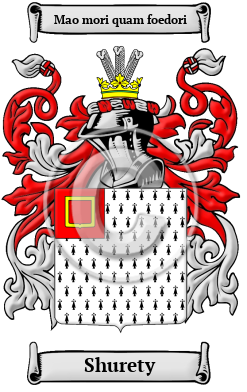 Early Origins of the Shurety family

The surname Shurety was first found in Durham where they were an ancient family, Barons of the Palatinate, who took their name from the residence Super Tysam, Sur Tees, Upon the river Tees, their chief seat being Dinsdale. [1] The principal male died out long ago, but younger branches of the family in recent generations have prospered. The Dinsdale property was lost but was repurchased in the late 1800s by the family.

Early History of the Shurety family

This web page shows only a small excerpt of our Shurety research. Another 167 words (12 lines of text) covering the years 1100, 1300 and 1524 are included under the topic Early Shurety History in all our PDF Extended History products and printed products wherever possible.

More information is included under the topic Early Shurety Notables in all our PDF Extended History products and printed products wherever possible.

Shurety Settlers in Australia in the 19th Century