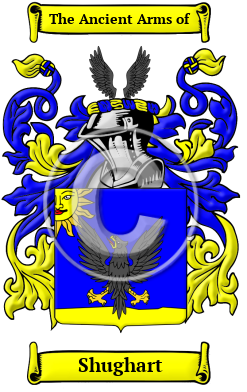 The roots of the distinguished German surname Shughart can be traced back to the state of Thuringia, where the name first emerged. "Shughart" is the Thuringian form of the Middle High German word "schuochworhte," which means "shoemaker."

Early Origins of the Shughart family

The surname Shughart was first found in the region of Thuringia, where it first emerged as a surname. At around the same time, the name was emerging in other regions in forms that correspond to other German dialects; for example, the name "Schubert" could be found in Saxony and Silesia, and "Schaumann" emerged in Westphalia.

Early History of the Shughart family

Another 30 words (2 lines of text) are included under the topic Early Shughart Notables in all our PDF Extended History products and printed products wherever possible.

Migration of the Shughart family

Some of the first settlers of this family name or some of its variants were: Martin Shugart, Christoph Schuchard and Adam Schuchard, German mercenaries who participated in the American Revolution, George Shugardt, who was naturalized in Philadelphia in 1840.