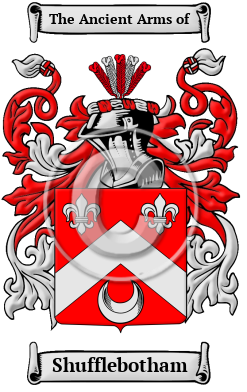 Early Origins of the Shufflebotham family

The surname Shufflebotham was first found in Lancashire where they held a family seat. This ancient name had a variety of spellings from Shovellbottom to Shoebottom. That it is a Lancashire name cannot be questioned. All historians agree that the 'bottom' appendage merely indicates that the original holder held the 'bottom land' or the choice land of the valley. The location is in south east Lancashire or possibly eastern Cheshire but the name has appeared anciently in Walton, Middleton, Cheetham, Tottington, Bury Skelmersdale, and many other places.

One of the first records of the family was Richard de Schyppewallebothem who was listed in the Assize Rolls for Lancashire in 1285. [1] This source claims the name is from Shipperbottom, Lancashire, but we cannot find such a place today.

Cheshire has the most modern representatives of the name. The Saxon influence of English history diminished after the Battle of Hastings in 1066. The language of the courts was French for the next three centuries and the Norman ambience prevailed. But Saxon surnames survived and the family name was first referenced in the year Richard de Schypperwallebottom held estates in 1285. Holders of the name, all in Lancashire, subsequently spelt it Shepobotham (1579,) Shippobotham (1582,) Geroge Shupplebottom 1621, Charles Shifabotham 1626 and Richard Shufflebotham in 1674. [2]

Early History of the Shufflebotham family

This web page shows only a small excerpt of our Shufflebotham research. Another 62 words (4 lines of text) covering the years 1455 and 1487 are included under the topic Early Shufflebotham History in all our PDF Extended History products and printed products wherever possible.

More information is included under the topic Early Shufflebotham Notables in all our PDF Extended History products and printed products wherever possible.

Shufflebotham Settlers in Australia in the 19th Century