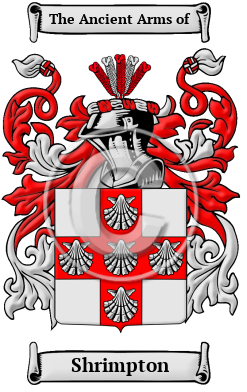 Early Origins of the Shrimpton family

The surname Shrimpton was first found in Gloucestershire where they held a family seat as Lords of the Manor. The family name was first referenced in the 13th century when they held estates in that shire.

Later Wycombe, Buckinghamshire was home to quite a number of the family: "From the reign of James I. to that of George III. sixteen mayors of Wycombe bore this name; six of these during the early portion of last century were called Ferdinando." [1] [2]

Harrison goes on to note that the name is "fairly common in Oxfordshire," and that it may denote "the Farm or Estate of Shrimp, a nickname [Middle English shrimp, a shrimp; from Old English scrimman.]" [2]

Early History of the Shrimpton family

More information is included under the topic Early Shrimpton Notables in all our PDF Extended History products and printed products wherever possible.

Shrimpton migration to the United States +

Shrimpton Settlers in United States in the 17th Century

Shrimpton Settlers in United States in the 19th Century

Shrimpton Settlers in United States in the 20th Century

Shrimpton Settlers in Australia in the 19th Century

Shrimpton Settlers in New Zealand in the 19th Century