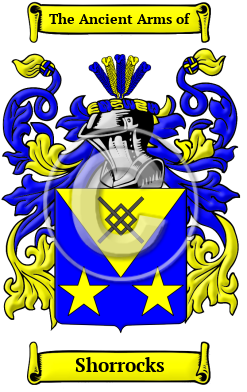 Early Origins of the Shorrocks family

The surname Shorrocks was first found in Lancashire at Shorrock Green, a former hamlet 4 miles west of Blackburn. It was here that Richard de Shorrok was registered in the the Subsidy Rolls of 1332. [1]

Early History of the Shorrocks family

Spelling variations of this family name include: Shorrock, Shorock, Sharrock, Shurrock, Sharrox, Sharrocks and many more.

Distinguished members of the family include Robert Sharrock, English Rector of Drayton Parslow from 1639 to 1642; and his son, Robert Sharrock (1630-1684), an English churchman and...
Another 26 words (2 lines of text) are included under the topic Early Shorrocks Notables in all our PDF Extended History products and printed products wherever possible.

Migration of the Shorrocks family