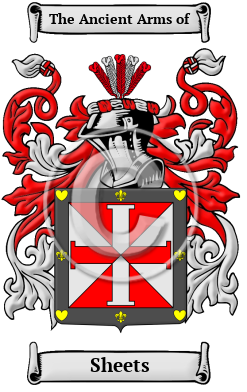 Early Origins of the Sheets family

The surname Sheets was first found in Norfolk where the name dates back to the Domesday Book of 1086 where it was listed as Scet and Schett. [1] One of the first records of the name was Ricardus filius Schet who was listed in the Pipe Rolls of 1166 in Norfolk. A few years later the Pipe Rolls of 1201 lists Walter Sket in Shropshire. [2] One reference claims the name traces its origin to an Old Norse byname Skjotr which literally meant "swift." [3] Another reference claims that it was a baptismal name as "the son of Sket." [4] Yet another reference claims that it is French in origin and is a variant of Keat or Keats. [5] We disagree with this latter reference. Whatever the origin, the name was concentrated in Norfolk in the early years "found frequently as Sket in Norfolk and neighbouring county of Suffolk in the Hundred Rolls." [4] Listings in the Hundred Rolls of 1273 include: Sketh [no personal name] in Norfolk; Alan Sket and Nicholas Sket in Suffolk; and John Sket in Norfolk.

Early History of the Sheets family

This web page shows only a small excerpt of our Sheets research. Another 72 words (5 lines of text) covering the years 1201, 1455 and 1487 are included under the topic Early Sheets History in all our PDF Extended History products and printed products wherever possible.

Spelling variations of this family name include: Skeat, Skeath, Skate, Skeet, Skeets, Skayte and many more.

More information is included under the topic Early Sheets Notables in all our PDF Extended History products and printed products wherever possible.

In the United States, the name Sheets is the 1,677th most popular surname with an estimated 17,409 people with that name. [6]

Sheets migration to the United States +

Sheets Settlers in United States in the 18th Century

Sheets Settlers in United States in the 19th Century

Sheets Settlers in Canada in the 18th Century