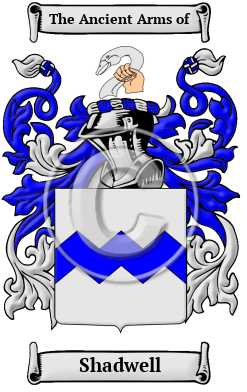 The name Shadwell is part of the ancient legacy of the Anglo-Saxon tribes of Britain. It is a product of when the family lived in one of the various places called Chadwell in the counties of Essex, Hertfordshire, Leicestershire, and Wiltshire. Places called Caldwell exist in Warwickshire and the North Riding of Yorkshire. There is also a Chardwell in Essex and a Chardle Ditch in Cambridgeshire as well as a plethora of similarly-named places throughout England. The surname Shadwell is derived from the names of these settlements, which are ultimately derived from the Old English words ceald, which means cold, and wielle, which means spring or stream. [1]

Early Origins of the Shadwell family

The surname Shadwell was first found in Essex at Chadwell, a parish, in the union of Orsett, hundred of Barstable. "At the time of the Norman survey, the parish belonged principally to the Bishop of London, and some portions to Odo, Bishop of Bayeux, and others. [2] The Domesday Book of 1086 lists the place name was Celdeuuella. [3]

Early History of the Shadwell family

This web page shows only a small excerpt of our Shadwell research. Another 89 words (6 lines of text) covering the years 1200, 1614, 1640, 1644, 1642, 1692 and 1689 are included under the topic Early Shadwell History in all our PDF Extended History products and printed products wherever possible.

The first dictionaries that appeared in the last few hundred years did much to standardize the English language. Before that time, spelling variations in names were a common occurrence. The language was changing, incorporating pieces of other languages, and the spelling of names changed with it. Shadwell has been spelled many different ways, including Chadwell, Chadall, Shadwell, Chadwel and others.

Distinguished members of the family include William Chadwell (born 1614), an English lawyer and politician, Member of Parliament for Mitchell (1640-1644), he supported the Royalist cause in the English Civil War; and Thomas Shadwell (1642-1692), an English poet and playwright who was appointed Poet Laureate in 1689. "He was grandson of George Shadwell, and son of John Shadwell of the parish of Broomhill, Norfolk. He claimed descent from the family...
Another 70 words (5 lines of text) are included under the topic Early Shadwell Notables in all our PDF Extended History products and printed products wherever possible.

Shadwell migration to the United States +

Thousands of English families in this era began to emigrate the New World in search of land and freedom from religious and political persecution. Although the passage was expensive and the ships were dark, crowded, and unsafe, those who made the voyage safely were rewarded with opportunities unavailable to them in their homeland. Research into passenger and immigration lists has revealed some of the very first Shadwells to arrive in North America:

Shadwell Settlers in United States in the 17th Century

Shadwell Settlers in United States in the 18th Century

Shadwell Settlers in United States in the 19th Century

Shadwell Settlers in Australia in the 19th Century