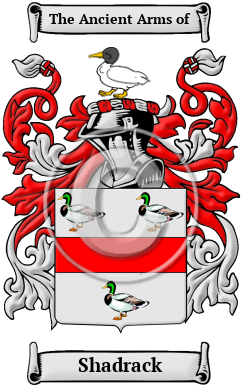 The Shadrack surname derives from the Middle English word "scheldrake," a type of brightly colored duck, from the East Anglian dialect term "scheld," meaning "variegated," and "drake," a "male duck." It has been suggested that the surname evolved from a nickname for a vain or showy person. [1]

Early Origins of the Shadrack family

The surname Shadrack was first found in Essex where Roger Scheldrac was the first listing of the family who appeared in the Pipe Rolls of 1195. [2] Later, the Hundredorum Rolls of 1273 listed Adam Sceyldrake in Suffolk. [3]

Early History of the Shadrack family

This web page shows only a small excerpt of our Shadrack research. Another 78 words (6 lines of text) covering the years 1195, 1275, 1662, 1802, 1756 and 1632 are included under the topic Early Shadrack History in all our PDF Extended History products and printed products wherever possible.

Sound was what guided spelling in the essentially pre-literate Middle Ages, so one person's name was often recorded under several variations during a single lifetime. Also, before the advent of the printing press and the first dictionaries, the English language was not standardized. Therefore, spelling variations were common, even among the names of the most literate people. Known variations of the Shadrack family name include Shelldrake, Sheldrake, Shelldrick, Shelldrick, Sheldrick, Shelldrack, Sheldrack, Shelldreck and many more.

Another 46 words (3 lines of text) are included under the topic Early Shadrack Notables in all our PDF Extended History products and printed products wherever possible.

Shadrack Settlers in Australia in the 19th Century