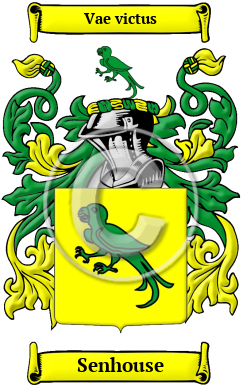 Early Origins of the Senhouse family

The surname Senhouse was first found in Cumberland where they held a family seat from early times and their first records appeared on the census rolls taken by the ancient Kings of Britain to determine the rate of taxation of their subjects.

Early History of the Senhouse family

Spelling variations of this family name include: Senhouse, Sevenhouse and others.

Distinguished members of the family include William Senhouse (died 1505), also called William Sever, an English priest, successively Bishop of Carlisle, 1495-1502, and Bishop of Durham, 1502-1505. His name appears as Senhouse, Senews, Senuz, Sever, and Siveyer and was born at Shincliffe, a village close to Durham. Richard Senhouse (died 1626), was Bishop of Carlisle and third son of John Senhouse (d. 1604) of Netherhall, Cumberland. "He became fellow of St. John's...
Another 71 words (5 lines of text) are included under the topic Early Senhouse Notables in all our PDF Extended History products and printed products wherever possible.

Senhouse Settlers in West Indies in the 18th Century