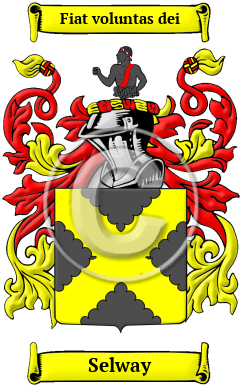 The Anglo-Saxon name Selway comes from the personal name Saelwig which is an Old English word meaning prosperity war. The personal name Saelwig was an ancient font name that was brought to England by the Normans. After the Norman Conquest, the Old English naming system gradually dissolved. Old English names became less common and were replaced by popular continental European names. The earliest surnames in England were found shortly after the Norman Conquest and are of Norman French rather than native English origins.

Early Origins of the Selway family

The surname Selway was first found in Staffordshire where "about the reign of Henry III, William Salwey was Lord of Leacroft, a hamlet in the parish of Cannock in Staffordshire; hence the family removed to Stanford in Worcestershire; of which John Salwey was owner in the third of Henry IV." [1]

Early History of the Selway family

One relatively recent invention that did much to standardize English spelling was the printing press. However, before its invention even the most literate people recorded their names according to sound rather than spelling. The spelling variations under which the name Selway has appeared include Salwey, Sewyn, Selwyn, Selwin, Sallowaye and others.

Notables of this surname at this time include: Arthur Salwey of Stanford Court at Stanford-on-Teme, Worcestershire; and his son, Humphrey Salwey (1575-1652), an English politician, Member of Parliament for Worcestershire (1640), buried in Westminster Abbey; Richard Salwey (1615-1685?) an...
Another 38 words (3 lines of text) are included under the topic Early Selway Notables in all our PDF Extended History products and printed products wherever possible.

Selway migration to the United States +

At this time, the shores of the New World beckoned many English families that felt that the social climate in England was oppressive and lacked opportunity for change. Thousands left England at great expense in ships that were overcrowded and full of disease. A great portion of these settlers never survived the journey and even a greater number arrived sick, starving, and without a penny. The survivors, however, were often greeted with greater opportunity than they could have experienced back home. These English settlers made significant contributions to those colonies that would eventually become the United States and Canada. An examination of early immigration records and passenger ship lists revealed that people bearing the name Selway arrived in North America very early:

Selway Settlers in United States in the 17th Century

Selway Settlers in Australia in the 19th Century

Selway Settlers in New Zealand in the 19th Century

Motto: Fiat voluntas dei
Motto Translation: The will of God be done.