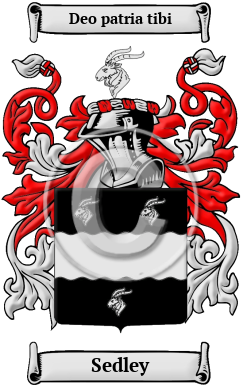 Early Origins of the Sedley family

The surname Sedley was first found in Kent where the family had three distinct branches: Sedley of Aylesford; Sedley of Great Chart; and Sedley of Southfleet. The oldest appears to be William Sedley of Southfleet who was High Sheriff of Kent in 1546. Aylesford dates back to the Britons when it was called Saissenaighobail, in commemoration of their having here defeated the Saxons; and by the latter, after their settlement in the country, Eaglesford, of which the present name is a corruption. [1]

In 1240, Ralph Frisburn, on his return from the Holy Land, founded a Carmelite monastery, under the patronage of Richard, Lord Grey, of Codnor: many parts of the building are entire, though the greater portion of the site is occupied by a mansion erected by Sir William Sedley, and now the residence of the Earl of Aylesford.

Early History of the Sedley family

Sedley Settlers in Australia in the 19th Century