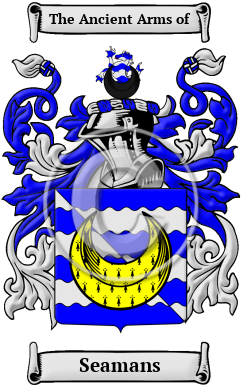 The distinguished surname Seamans is Anglo-Saxon in origin. It is derived from the Old English "saemann," meaning "sea-man," and was likely first borne by a sailor. "Sæmann occurs in Domesday-Book. Seman is the usual 13th-cent [version of the name] Occasionally this name may represent the Anglo-Saxon Saemund [Old English sae, sea+mund, protector] and Sigemund [Old English sige, victory]" [1]

"In the Domesday of Surrey there is a Seman, who held lands before the making of that record. Anglo-Saxon Sae-mann, a sailor." [2]

Early Origins of the Seamans family

The surname Seamans was first found in Suffolk, where the Hundredorum Rolls of 1273 list: Seman de Reston; Seman le Carpenter; Seman Eche; and Robert filius Seman at that time. The first record of the family was listed in Hodgson's History of Northumberland where John filius Semanni was listed there in 1169. [3]

Early History of the Seamans family

This web page shows only a small excerpt of our Seamans research. Another 95 words (7 lines of text) covering the years 1273, 1606, 1680, 1628, 1675 and 1044 are included under the topic Early Seamans History in all our PDF Extended History products and printed products wherever possible.

Spelling variations of this family name include: Seaman, Seamom, Semon, Seman, Seamons, Semones and many more.

Distinguished members of the family include William Seaman (1606-1680), English Orientalist, first translator of the New Testament into Turkish. In 1628 he became rector of Upton-Scudamore, a living in the gift of Queen's College, Oxford, which he held up to the time of his death. Lazarus Seaman (died 1675), was an English Puritan divine, a native of Leicester, where he was born...
Another 62 words (4 lines of text) are included under the topic Early Seamans Notables in all our PDF Extended History products and printed products wherever possible.

In the United States, the name Seamans is the 13,163rd most popular surname with an estimated 2,487 people with that name. [5]

Seamans migration to the United States +

Seamans Settlers in United States in the 19th Century

Seamans Settlers in United States in the 20th Century

Seamans Settlers in Australia in the 19th Century