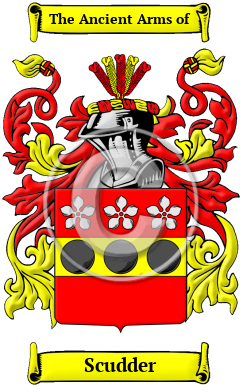 Early Origins of the Scudder family

The surname Scudder was first found in Kent where they held a family seat as Lords of the Manor. The Saxon influence of English history diminished after the Battle of Hastings in 1066. The language of the courts was French for the next three centuries and the Norman ambience prevailed. But Saxon surnames survived and the family name was first referenced in the 13th century when they held estates in that county.

Early History of the Scudder family

This web page shows only a small excerpt of our Scudder research. Another 70 words (5 lines of text) covering the years 1455, 1487, 1659, 1633, 1643 and 1645 are included under the topic Early Scudder History in all our PDF Extended History products and printed products wherever possible.

Spelling variations of this family name include: Scudder, Skudder, Skutter, Scutter and others.

Distinguished members of the family include Henry Scudder (d. 1659), an English clergyman of Presbyterian views, a devotional writer, and member of the Westminster Assembly. "He was minister at Drayton in Oxfordshire, and in 1633 was presented by the king to the living of Collingbourne-Ducis, near Marlborough...
Another 46 words (3 lines of text) are included under the topic Early Scudder Notables in all our PDF Extended History products and printed products wherever possible.

In the United States, the name Scudder is the 6,253rd most popular surname with an estimated 4,974 people with that name. [1]

Scudder migration to the United States +

Scudder Settlers in United States in the 17th Century

Scudder Settlers in United States in the 19th Century

Scudder Settlers in Australia in the 19th Century

Scudder Settlers in New Zealand in the 19th Century