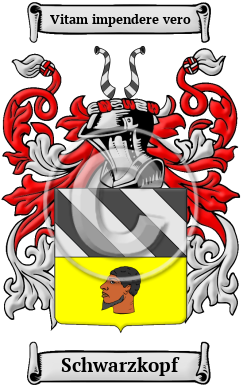 From the historical and enchanting region of Germany emerged a multitude of noble families, including the distinguished Schwarzkopf family. Originally, the German people were known only by a single name. The process by which hereditary surnames were adopted in German is extremely interesting. Surnames evolved during the Middle Ages when people began to assume an extra name to avoid confusion and to further identify themselves. Often they adopted names that were derived from nicknames. Nickname surnames were derived from an eke-name, or added name. They usually reflected the physical characteristics or attributes of the first person that used the name. The name Schwarzkopf is a nickname type of surname for a person with black hair. Looking back further, we find the name Schwarzkopf was originally derived from the Old German words "schwartz," meaning "black," and "kopf," meaning "head."

Early Origins of the Schwarzkopf family

The surname Schwarzkopf was first found in the Saxon province of Altmark, where the name gained a significant reputation for its contribution to the emerging mediaeval society. The oldest branch of the family had its seat at the estate Uenglingen near Stendal as early as 1400. In 1443 they acquired estates in West-Heeren, in 1447 in Wallenrode, and by 1466 they had their seat in the city of Stendal. The family later became more prominent as many branches of the same house acquired distant estates, mainly in the areas of Hessen and Brunswick, always elevating their social status through their contributions in public and military service.

Early History of the Schwarzkopf family

This web page shows only a small excerpt of our Schwarzkopf research. Another 274 words (20 lines of text) covering the years 1637, 1792, and 1858 are included under the topic Early Schwarzkopf History in all our PDF Extended History products and printed products wherever possible.

More information is included under the topic Early Schwarzkopf Notables in all our PDF Extended History products and printed products wherever possible.

Schwarzkopf migration to the United States +

Schwarzkopf Settlers in United States in the 19th Century