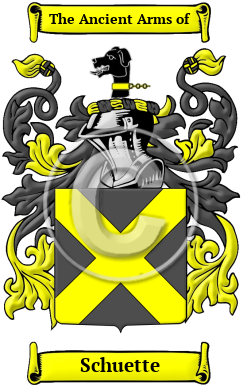 The name Schuette comes from the Rhineland, an ancient region of Germany. In pre-medieval times, the Germans used only one name, but later they were forced by a growing population to adopt hereditary surnames; so as to remain distinct from the many others of the same first name. Local names were often chosen. They originally indicated land ownership, and frequently carried the prefix von, meaning "of" or "from," which is often taken as an indication of aristocratic lineage. Schuette was a name for some one lived in the region of Schuetz in various areas of Germany.

Early Origins of the Schuette family

The surname Schuette was first found in the Rhineland valley, where this old family name became a prominent contributor to the development of the district from ancient times. Numerous family members bearing this name were prominent in social affairs. The family, as it spread throughout Germany, played a fundamental role in many regions as they emerged to form alliances with other families within the Feudal System. Chronicles first mention Johann Scuette of Luebeck in 1319 and Woelfel Schuetze of Eger in 1320.

Early History of the Schuette family

Many cultural groups lived in the German states in medieval times. Each had its own dialect and traditions, and unique variations of popular names. Low German, which is similar to contemporary Dutch, was spoken in Westphalia. German names are characterized by additions such as regional suffixes and phrases that tell something about the origin or background of its original bearer. Further contributing to the variation in German names was the fact that there were no spelling rules in medieval times: scribes recorded names according to their sound. The recorded spelling variations of Schuette include Schuetze, Schuett, Schuette, Schuetzmann and others.

Notables with the name Schuette during this period were Katharina Zell née Schütz (1497-1562), German Protestant writer during the Reformation; Caspar Schütz (c. 1540-1594), German historian, Professor of Poetry at the University of Königsberg from 1562 to 1565; Heinrich Schütz (1585-1672), the outstanding German composer of the 17th century, who wrote...
Another 50 words (4 lines of text) are included under the topic Early Schuette Notables in all our PDF Extended History products and printed products wherever possible.

In the United States, the name Schuette is the 13,650th most popular surname with an estimated 2,487 people with that name. [1]

Schuette migration to the United States +

Between the 17th and 20th centuries, hundreds of thousands of Europeans came to North America, and many Rhinelanders were among them. They had many various reasons for making the choice: to escape poverty and persecution, for adventure, and for the opportunity to own their own land. Ellis Island, one of the main American immigration centers, saw many settlers as they moved on to the states of Pennsylvania, Ohio, Texas, Illinois, California, and New York. In Canada, they found homes in Ontario, and on the great plains of the Midwestern provinces. The Schuette were among of the early German families that came to North America:

Schuette Settlers in United States in the 18th Century

Schuette Settlers in United States in the 19th Century

Schuette Settlers in United States in the 20th Century