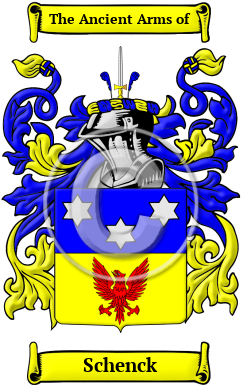 A multitude of prestigious family names, such as the surname Schenck, were formed in the lands which became the modern state of Silesia. In the medieval era, Germany was fragmented and inhabited by numerous Barbarian tribes, who fought amongst themselves for control of the land. The ancient dukedom of Silesia derived its name from the Germanic tribe named the Silingers, who occupied Silesia between the 2nd and the 6th centuries.

Early Origins of the Schenck family

The surname Schenck was first found in Silesia, where this family name became a prominent contributor to the development of the district from the 13th century onwards. Always prominent in social affairs, the name became an integral part of that turbulent region as it emerged to form alliances with other families within the Feudal System and the nation. The name Schenck was associated with service to many princely families, and several bearers of the name achieved prominent positions, such as Werner Schenck von Reicheneck, who was bishop of Bamberg in 1329.

Early History of the Schenck family

This web page shows only a small excerpt of our Schenck research. Another 165 words (12 lines of text) covering the years 1764, 1660, 1711, 1788 and 1841 are included under the topic Early Schenck History in all our PDF Extended History products and printed products wherever possible.

Notables of the period with the surname Schenck were Schenk von Limburg (middle of 13th century), who was a noted German poet in the service of the Hohenstaufen Kings. Schenk von Lisseburg was also a poet...
Another 36 words (3 lines of text) are included under the topic Early Schenck Notables in all our PDF Extended History products and printed products wherever possible.

In the United States, the name Schenck is the 5,475th most popular surname with an estimated 4,974 people with that name. [1]

Schenck migration to the United States +

Schenck Settlers in United States in the 17th Century

Schenck Settlers in United States in the 18th Century

Schenck Settlers in United States in the 19th Century