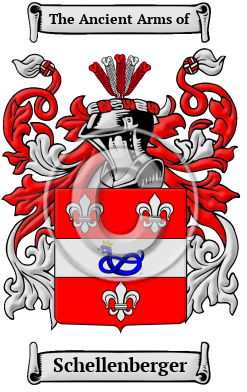 The surname Schellenberger is a Westphalian-German nickname. Such surnames were very common in Westphalia. They were adapted from traditional eke-names, or added names, that described physical characteristics of their bearers. Schellenberger is a hereditary surname for a person who was either wild or clamorous. The name was originally derived from the German word "schel," which means "noisy" or "loud."

Early Origins of the Schellenberger family

The surname Schellenberger was first found in Westphalia, where the name emerged in mediaeval times as one of the notable families of the region. From the 13th century on the surname was identified with the great social and economic evolution which made this territory a landmark contributor to the development of the German nation. As early as 1526 they had their seat at the manor Schellenberg near Essen.

Early History of the Schellenberger family

In the medieval era, many different cultural groups lived in the German states. There are thus many regional variations of German surnames from that era. Westphalians spoke Low German, which is similar to modern Dutch. Many German names carry suffixes that identify where they came from. Others have phrases attached that identify something about the original bearer. Other variations in German names resulted from the fact that medieval scribes worked without the aid of any spelling rules. The spelling variations of the name Schellenberger include Schell, Schelle, Schelling, Scheller and others.

Notables of the period with the name Schellenberger were Johann Heinrich Schmelzer (ca. 1620-1680), an Austrian composer and violinist ; Johann Schelle (1648-1701), a German Baroque composer; Friedrich Wilhelm von Schelling (1775-1854, ennobled...
Another 33 words (2 lines of text) are included under the topic Early Schellenberger Notables in all our PDF Extended History products and printed products wherever possible.

Schellenberger migration to the United States +

Schellenberger Settlers in United States in the 18th Century

Schellenberger Settlers in United States in the 19th Century