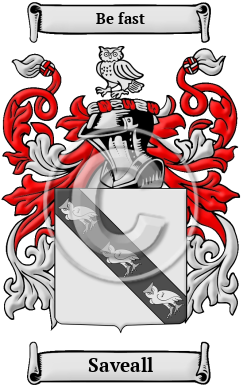 Early Origins of the Saveall family

The surname Saveall was first found in Yorkshire where "the family of Savile was one of the most illustrious in the West Riding. Some writers have fancifully ascribed to it an Italian origin, but it probably had its rise at Silkston, in this county." [3]

Early History of the Saveall family

Outstanding amongst the family at this time was Sir George Savile, 1st Baronet; Sir William Savile, 3rd Baronet (1612-1644), an English politician, Member of Parliament for Yorkshire in 1640 and Old Sarum (1641-1642); George Savile, 1st Marquess of...
Another 37 words (3 lines of text) are included under the topic Early Saveall Notables in all our PDF Extended History products and printed products wherever possible.

Saveall Settlers in Australia in the 19th Century