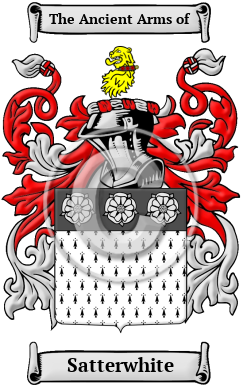 The ancestors of the Satterwhite surname lived among the ancient Anglo-Saxon culture. The name comes from when they lived in the ancient chapelry of Satterthwaite found near Hawkeshead in Lancashire. This surname was originally derived from the Old English elements soetr meaning shield and pveit meaning pasture. [1]

Early Origins of the Satterwhite family

The surname Satterwhite was first found in Cumbria at Satterthwaite, a chapelry, in the parish of Hawkshead, union of Ulverston, hundred of Lonsdale in Lancashire. [2] The village dates back to at least 1336 when it was listed as Sterthwayt. [1]

"Small and secluded as is the spot, it has originated a surname that has spread far and wide. It seems to have reached London about the 16th century." [3]

Early History of the Satterwhite family

Before English spelling was standardized a few hundred years ago, spelling variations of names were a common occurrence. Elements of Latin, French and other languages became incorporated into English through the Middle Ages, and name spellings changed even among the literate. The variations of the surname Satterwhite include Satterthwaite, Satherthwaite, Satterthwater and many more.

Notables of the family at this time include Thomas Satterthwaite (1720-1790) a prominent Quaker in Lancaster, Lancashire who was involved in the slave trade. He was the son of Thomas Satterthwaite (1685-1728) and Mary Ledger. His brother, Benjamin Satterthwaite became a factor or agent for a group of Lancaster slave traders, first in Barbados and then in...
Another 56 words (4 lines of text) are included under the topic Early Satterwhite Notables in all our PDF Extended History products and printed products wherever possible.

In the United States, the name Satterwhite is the 5,476th most popular surname with an estimated 4,974 people with that name. [4]

Satterwhite migration to the United States +

Satterwhite Settlers in United States in the 20th Century